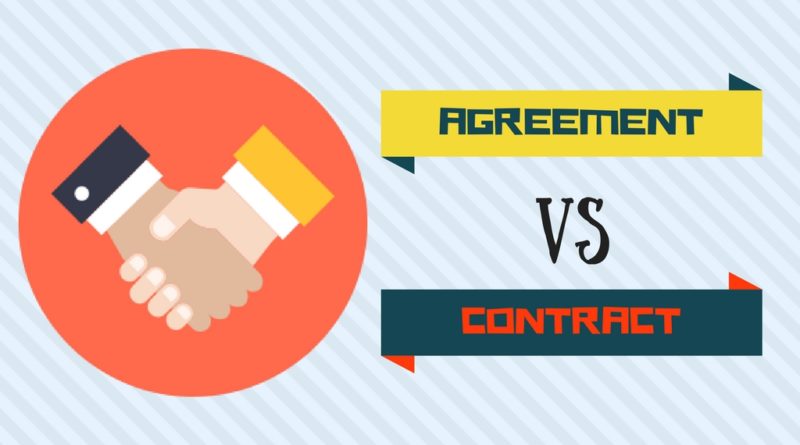 Indian Contract Act, 1872 defined the terms Agreement and Contract in section 2(e) and section 2(h). This act is of immense importance because it affects every single person living in India since everyone of us enter into a contract with others with or without our knowledge. This act mainly deals with

“NOT EVERY AGREEMENT IS CALLED AS CONTRACT, BUT ALL CONTRACTS ARE CALLED AS AGREEMENTS”.

An Agreement can be easily defined as Offer by one individual and the approval or acceptance of that offer by another individual. An Agreement is a wider term and very complex in nature. Agreements only give rise to social and domestic obligations but when an Agreement is enforceable by law, it is called as a Contract. Agreements only show the consideration (or) same opinions (or) a promise to do something by one person to another.

Agreement between two persons regarding going to the movie (or) playing a game (or) attending a function, etc. This type of agreements are purely social and domestic and cannot be enforceable by law to create an obligation or compulsion to perform a promised thing.

The contract can be easily defined as an Agreement which is enforceable by law. The term Contract is of narrow scope when compared to an agreement. There are certain conditions or elements for an agreement to became into Contract, They are as follows

Mr.X wants to purchase a land from Mr.Y and Mr.Y is ready to sell it to Mr.X. Now Mr.X enters into the agreement with Mr.Y by paying some advance amount. This agreement becomes Contract because there is an intention to create a legal relation and after the preparation of agreement document, both the parties are legally obligated to perform the actions i.e, Mr.X has legal obligation to purchase a land and Mr.Y has legal obligation to sell it to Mr.X.

AGREEMENTCONTRACTAn Agreement is a common understanding between two parties which obtained from the offer made by an individual and acceptance of another individual.The contract is defined as an Agreement which can be enforceable by law. All the agreements which have a need for legal obligation can become contracts. ObligationAn Agreement is purely a social or domestic obligation.The contract consists of a legal obligation of the performance of an action. Nature and ScopeAn agreement is wider in scope and very complex in nature.The contract is very narrow in scope and not very complex in nature. RelationAll Agreements are not contracts because of no legal obligation.All Contracts are Agreements since to form a contract, there should be an agreement between the parties. Writing and RegistrationAgreements are usually oral in form and no need for registration and some agreements are also created in writing form.Contracts are usually are in written form and registered because oral contracts are hard to prove in legal grounds.

There are different types of agreements and contracts based on the rules laid down by the Indian Contract Act, 1872. Every Agreement or Contract should not violate any of the legal laws of the country and should not be created for unlawful purposes. The agreements or contracts which are considered as illegal or unlawful are void and the people who are involved in those can be punished by the law.