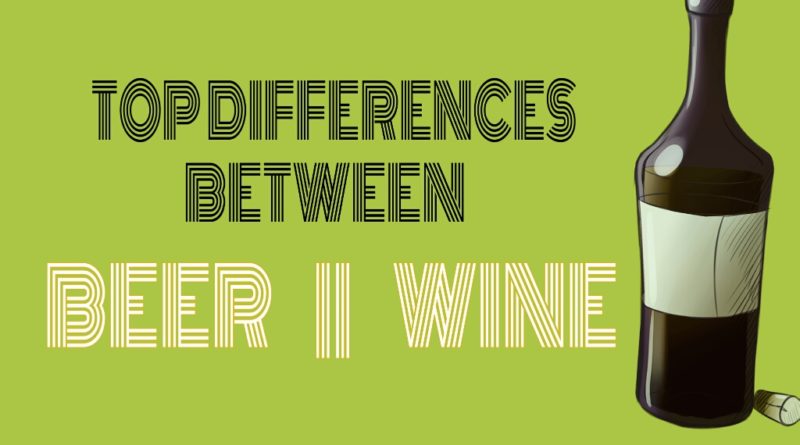 Beer is a brewed product that contains a small amount of alcohol when finished.Beer is mainly water, with some flavors from flowers making it bitter. It has the essence of the grain it was brewed from, so its taste is according to its ingredients.Beers are the fermented product of sugars obtained fromthe breakdown of complex polysaccharides and starches. A starch is basically a long chain of simple sugars all joined together.

Wine is the fermentation of sugar from fruit. Whilst it can technically be made from any sweet fruit, the term wine generally refers to alcohol fermented from grapes or grape juice unless some other fruit is specifically mentioned.Although a number of other fruits are also quite popular – such as plum, elderberry, and black currant.Non-grape wines are called fruit wine or country wine. Port wine is a type of fortified wine that is produced traditionally in Portugal and it’s most special feature is that it’s sweetness.

Let us see some of the most known differences between BEER and WINE in the comparison chart below.BEERWINEBeer – is actually very bitter in tasteWine – is actually sweet in taste Alcohol ContentBeer has Alcohol content ranging from 4%-6% Alcohol by volume (ABV)Wine has Alcohol content ranging from 9%-16% Alcohol by volume (ABV) Made usingTraditionally barley is used in making beer, other grains such as rice, maize, rye, and wheat have also been experimented with. And when it comes to experimentation with the flavors, the sky is the limit.Wine is made using mostly Tinta Barroca, Tinta Cão,Touriga Francesa, Tinta Roriz and Touriga Nacional varieties of grapes FlavoursDifferent flavors are produced via mixing different cereals and by different treatment of the cereals beforehand.Different fruits, including different types of wine grapes will give different flavors to the drink, which result in different types of wines, white wine,rose wine, red wine. IngredientsMain ingredient is malt (Barley, wheat ). Beer making process is known as brewing and the most common process involves fermentation of malted Barley.Main ingredients are fruits (mainly grapes). The making process involves the fermentation in fruit juices (Crushing of grapes) ProcessBeer is made from barley and hops and it undergoes a thorough fermentation and carbonation process to taste the way it does. Red wine is red because the skin is left on the grapes, while white wine has the grapes whose skins taken off. Other ProductsBeer and whiskey are made from fermented grains. Whiskey id distilled to concentrate the alcohol; beer is not.Wine is fermented from fruit, mostly grapes. If you distil it, you get brandy. If wine is given a second fermentation in the bottle, you get sparkling wine.

The difference between all the alcoholic beverages is due to the raw materials used and the process involved in making it. Here are the other types of alcohol that may interest you.

Liquor : Liquor is an alcoholic drink that is distilled from grains or plants.

Brandy : Brandy is the spirit which is basically made by distillation of wine.

Whiskey : Whiskey is chiefly a distilled alcoholic beverage made from fermented grains (Wheat, Barley etc) and stored in oak casks for a certain period of time.

Rum : Rum is a distilled alcoholic beverage made from Molasses, in layman language it is called Sugarcane juice.

Tequila : Tequila is from Mexico and it is a distilled alcoholic beverage made from fermented Agave fruit which is similar to Pineapple.

Champagne : Champagne is a type of foaming wine which comes from the Champagne district of France which involves secondary fermentation of wine to create Carbonation.

Gin : Gin is basically a distilled alcoholic beverage made from fermented grain mash with Juniper berries.