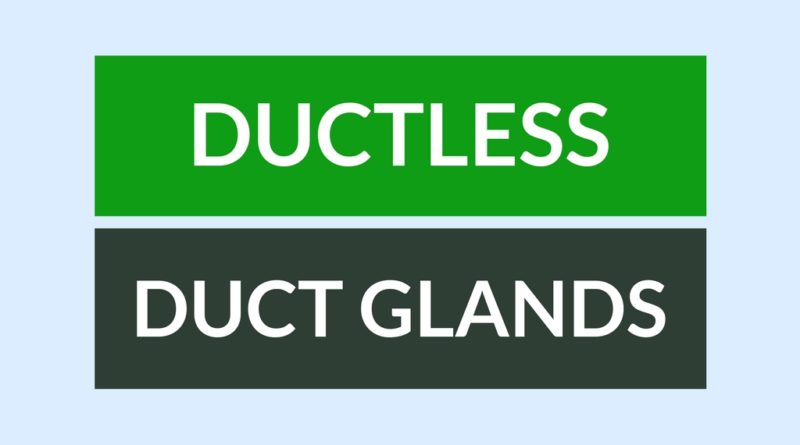 There are two types of glands in the human body and they are Ductless Glands and Duct Glands. They are also called Endocrine Glands and Exocrine Glands.

The Endocrine Glands are called as Ductless Glands, as there are no ducts for them.

⦿ The ductless glands secrete chemicals called hormones.
⦿ The hormones are discharged directly into the blood as there are no ducts.
⦿ The secreted hormones bring changes in the body like the growth of bones, metabolic activity, regulating the level of glucose, the growth of secondary sexual characteristics, etc.
⦿ The Examples of Ductless Glands are the pituitary gland, thyroid gland, adrenalin gland, insulin, testosterone and estrogen.

⦿ The Endocrine Glands are called as Duct Glands.
⦿ The Duct Glands secrete chemicals called Enzymes.
⦿ The enzymes are released into the glands through their ducts.
⦿ The insects secrete special chemicals called Pheromones, which are used for the purpose of Sexual reproduction.
⦿ The example of duct gland in the human body is Liver.
⦿ The examples of duct-glands include sweat, saliva, lacrimal, mammary, sebaceous, mucous, etc.