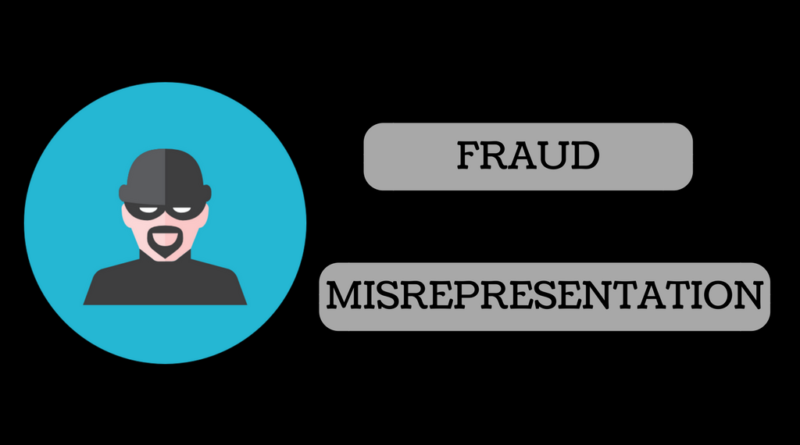 Fraud and Misrepresentation are the terms related to obtaining a Consent of a party to enter into an agreement between two or more persons. To enter into the contract, The parties required to get each others consent. Some people use different types of unfair practices to obtain the consent of another party. These unfair practices are as follows:

Fraud is the action which can be easily defined as willfully or intentionally cheating or deceiving other people by communicating false information to obtain their consent. Section.17 of the Indian Contract Act, 1872 stated that any action to be considered as Fraud should include one or more of the following:

If Mr.X took a loan from Mr.Y with the intention of not paying the money back. Then it is said that Mr.X committed Fraud.

It is not treated as Fraud If the party stays silent in matters of presenting the facts which are likely to affect the willingness of the other party. If the consent of other party is gained by performing Fraud, the contract becomes voidable at the option of the person who is injured.

⦿ There should be a false communication of information by one party to another party without an intention to deceive.
⦿ The Misrepresented information must relate to the material fact and should not be expressed as an opinion.
⦿ The person who communicated false information believes it is as true and he is not aware it is false.

Mr.X tells Mr.Y that his TV is in good condition and asked him to buy, Mr.Y bought Tv from him because of the trust he had in Mr.x. After some time the TV does not work properly and Mr.Y thought he is misled by Mr.X but Mr.X believed that his TV is good and he does not communicate false information to Mr.Y.

In case of fraud, the damage happens to one party only whereas in Misrepresentation both the parties are misguided unknowingly and got damaged.