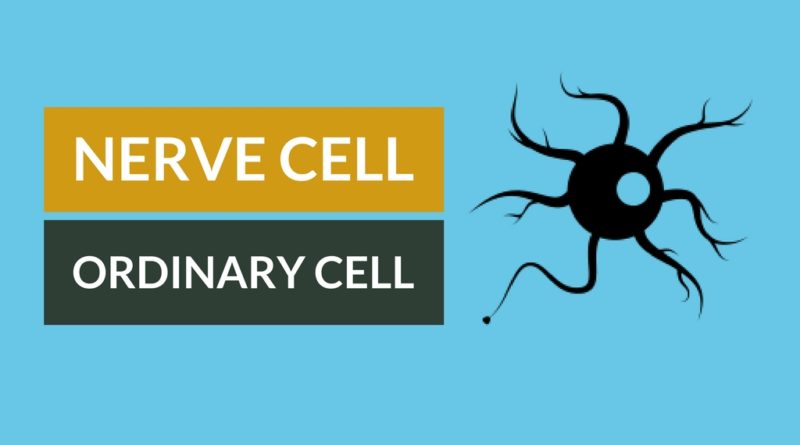 The cells are of two types and this article concentrates on analyzing the differences between ordinary cell and Nerve cell.

A cell is the basic structural and functional unit of the living organism and is capable of carrying the process of life independently. The word cell is derived from a Latin word ” Cella” means a chamber, This word is first introduced in biology by ‘Robert Hook’.

This is the outer limiting membrane that separates the internal components of the cell from extracellular material.

Cytoplasm refers to all cellular components located between plasma membrane and nucleus.

The nucleus is the largest structure in the cell usually it is spherical or oval in shape.

The structural unit of the nervous system is called as Nerve cell or Neuron. The nerve cell is a highly specialized cell and they carry impulses and messages to brain and body parts.

PRINCIPAL PARTS OF THE NERVE CELLS

It is the cell body, it has large and round nucleus. Nissil granules are present in the cytoplasm of the cyton.

It is the long and cylindrical tube-like structure, it arises from the cyton. The Axon is surrounded by a layer of fatty material known as Myelin Sheath.

Dendrites are branched thread like structure arising from cyton.

ORDINARY CELLNERVE CELLOrdinary cells are confined to all the body parts except nervous system.Neuron or Nerve cell belongs to the only nervous system of the human body. PARTSEach cell has three principal parts called plasma membrane, cytoplasm and nucleus.Each nerve cell has three main parts namely, Cyton, Axon and Dendrites. COLOURDifferent tissue in various organs possess different colours.Cell body or Cyton is grey in colour and Axon is white in colour. USESCells help in the functioning of organs in organ system of the human body.Nerve cells help in carrying sensations to the brain and spinal cord. NEW CELLOnce the cell is dead or destroyed, new cell generates in the place of dead or destroyed one.Once the cell is destroyed, the new cell is not generated in the place of dead one. NUCLEUSFunction, location, growth and formation decides the presence of nucleus in the cell.All nerve cells consists of prominent nucleus in them. OTHERSEach nerve cell ends with nerve terminal which connects another neuron or nerve cell.Function, location, growth and formation decides presence of nucleus.CONCLUSIONFrom the above discussion, it is very clear that both Nerve cell or Ordinary cell have many differences. The most noticed difference is that the cells exist in all parts of the body and the nerve cells are limited nervous system only.