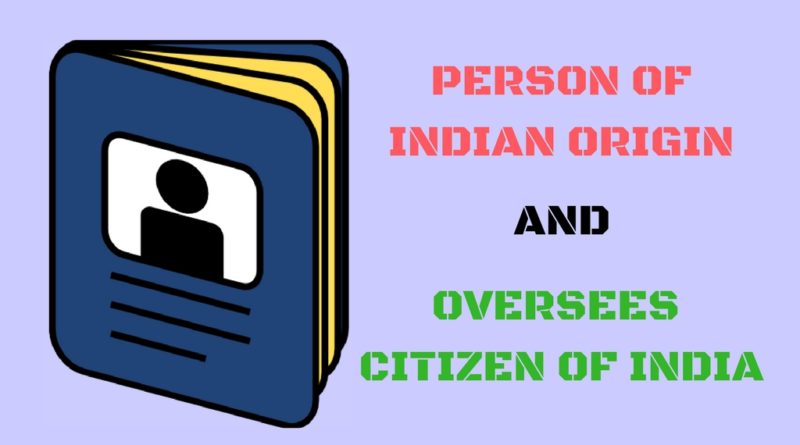 Indian’s feel moving out of India as a lifetime achievement and as a moment of pride. They work very hard to fulfill their dreams. Indian’s who leave India don’t want to lose their relations, connections for this they very often visit India every other year to meet their family, friends, etc.

A Non-Resident Indian (NRI) is a citizen of India who holds an Indian passport and has temporarily emigrated to another country for employment, education or other purposes.

Overseas Citizen of India (OCI) is a scheme that was introduced in response to demands for dual citizenship by the Indian people who are living in abroad, particularly in developed countries. OCIs are non-Indian citizens who have a lifetime visa to live and work in India with fewer restrictions.

PERSON OF INDIAN ORGINOVERSEES CITIZEN OF INDIAPIO cards are issued to persons who are either citizens or citizens of another country but are of Indian origin, through their parents.OCI cards are issued to persons who have taken citizenship in other countries, apart from India, but have Indian origin roots. Indian VisaPerson of Indian Origin (PIO) card holder doesn’t need an Indian visa to visit India for 15 years.Overseas Citizen of India (OCI) card holder has a lifetime visa offered by the Indian government to visit India. Exempted FromThe PIO card holders were exempted from reporting at the Foreigner Regional Registration Office (FRRO) during the first 180 days of stay in India. The person should register with FRRO within 30 days after completion of 180 days. The OCI card holders never have to register with Foreigner Regional Registration Office (FRRO), no matter how long the duration of stay is. Stay RequirementsThe PIO card holder has to reside in India for a minimum of 7 years to apply for Indian Citizenship.The OCI card holder is permitted to apply for Indian Citizenship only after completion of 5 years after the issue of OCI card and he also have to reside in India for minimum of 1 year before applying.

⦿ Provided with separate lines at immigration counters at all international airports in India to facilitate easy verification and stamping of passport.

⦿ Enjoy same rights as NRI’s in matters relating to property acquisition, buying and selling, except agricultural and plantation properties.

⦿ Don’t have any voting rights and are not eligible to contest in elections in India.

⦿ Don’t have the eligibility to get government jobs as Indian citizens.

Recently, Indian Prime Minister Shri Narendra Modi at the event “Pravasi Bharatiya Diwas” requested the Indian people who are living in abroad to switch from their PIO cards to OCI cards before June-30-2017 because OCI cards carry more benefits than the PIO cards.