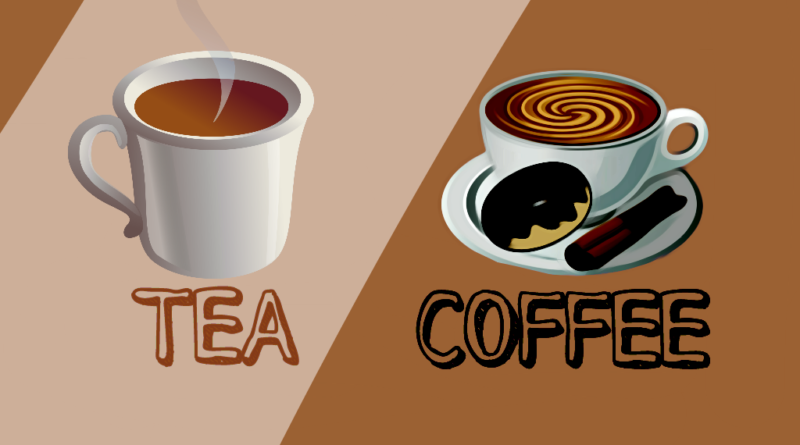 GENERAL HEALTH  January 8, 2017February 23, 2017adminshare thisEvery one of us has tasted Tea and Coffee at least once in our life. But how many of us know how to differentiate Tea and Coffee. Both these are known as refereshment beverages which are highly popular in the world. This article concentrates on distinguishing between Tea and Coffee.

Tea is an aromatic beverage commonly prepared by pouring hot or boiling water over tea leaves. After picking, the tea leaves are immediately dried, the leaves then turn darker as their chlorophyll breaks down and tannins are released.  Tea is bitter and astringent in nature, it of compounds such as the polyphenols and amino acids and a few stimulants.

Coffee is a brewed drink prepared from roasted coffee beans. Dried coffee seeds beans are roasted to varying degrees, depending on the desired flavor. Coffee is acidic in nature and can have a stimulating effect on humans because of its caffeine content.

Let us see some of the differences and similarities of TEA and COFFEETEACOFFEEAfter water, Tea is the most widely consumed drink or beverage in the world.Coffee is one of the most popular drinks in the world. ConsumptionTea is often consumed with additions to the basic tea leaf and water.Roasted beans are ground and brewed with near boiling water and milk is added to produce coffee as a beverage. VarietiesTea is processed in different ways like green tea, black tea, flowering tea, masala tea, etc.Coffee is prepared in different ways and varieties, such as espresso, French press, cappuccino, etc. Health BenefitsBlack and green teas contain certain compounds which protect human body against cancer.The Harvard School of Public Health stated that “Coffee may have potential health benefits, but more research needs to be done.” PreparationTea is prepared by boiling tea powder in the water along with additions and then boiled again after the addition of milk and sugar. Instant coffee is prepared by soluble coffee bean powder that can be quickly dissolved in hot water. Why people Consume it ?Tea is the most consumed drink in the world because of the reasons, tea is cheap, affordable, and addictive.People drink coffee drink it mainly for the taste. The minority may consume some for caffeine boost also. Producing CountryChina is the largest producer of Tea in the world.Coffee is a major export commodity and brazil exports around 70% of the world’s coffee.