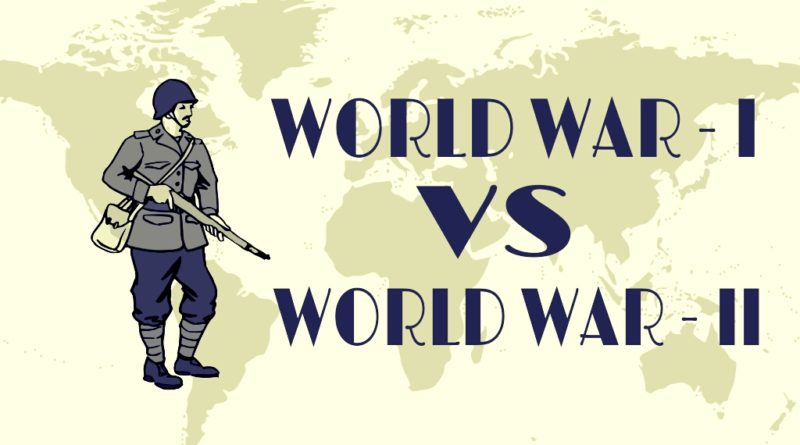 “It is the evil things we shall be fighting against, brute force, bad faith, injustice, oppression and persecution”- British Prime Minister Neville Chamberlain.

Woodrow Wilson-Democratic President of the US, David Lloyd George-Prime Minister of Great Britain, George Clemenceau-Prime Minister of France. These people played significant roles in World War-I and also decided the terms of the Treaty of Versailles.

World War-II was the most destructive conflict in history. It cost more money, damaged more property, killed more people, and caused more far-reaching changes than any other war in history.

Adolf Hitler-Leader of the Nazi party in Germany, Benito Mussolini-Fascist leader of Italy, Francisco Franco- Dictator of Spain are the important people in triggering the World War-II.

Let us see some of the differences between World War- I and World War- II in the below comparison table.

WORLD WAR-1WORLD WAR-2World War-I is also known as The Great War, First World War, The European War, The War of the Nations.World War-II is also known as Second World War, World War Two, The Great Patriotic War. When It Happened ?World War-I was fought between 28 July 1914 – 11 November 1918. It lasted for 4 years.World War-II was fought between 1 September 1939 – 2 September 1945. It lasted for 6 years. Why is it started ?World War-I started after the assassination of Archduke Franz Ferdinand and his wife Sophie on June 28, 1914, of Austria by Serbian nationalists.World War-II started when Great Britain and France declared a war on Germany because of the attack on Poland by Germany. Groups Of NationsThe nations which participated in World War-I were divided into two groups namely ‘The Central Powers’ and ‘The Allied Powers’.The nations which participated in World War-II were referred to as ‘The Axis Powers’ and ‘The Allied Powers’ Nations ParticipatedThe central powers group consisted of Germany, Austria-Hungary, Ottoman Empire (Turkey) and Bulgaria. The Allied powers group consisted of Russia, Great Britain, France, Italy, Japan, Belgium, Serbia and (from 1917) the U.S.The Axis Powers group consisted of Germany, Italy, Spain, Bulgaria and Japan. The Allied powers group consisted of France, Britain, US, Russia, Poland, Belgium and China. Fight BetweenWorld War-I is a fight between monarchies i.e Fighting of countries was for nationalism and pride.World War-II is a fight amongst fascists, communists, and democrats and to safeguard the “superiority” of Aryan race according to Adolf Hitler. End of WarAfter the World War-I, the Peace Conference is held in Paris and The 1919 Treaty of Versailles was made to bring peace.Treaty of Peace with Japan signed on on September 8, 1951, which ended World War-II and also ended the Allied occupation of Japan. Surrendered CountriesGermany had formally surrendered on November 11, 1918, Germany was asked to pay for their crimes, and all nations had agreed to stop fighting and World War-I ended.On 15 August 1945, Japan surrendered by signing the surrender documents on september-2-1945 and also the defeat of Germany which ended the World war-II. How many People Died ?More than 65 million men from 30 countries fought in World War-I. Nearly 10 million people died.Approximately 52.2 million people died because of the World War-II. Weapons UsedA large number of new weapons were used in World War-I i.e. The Machine gun and Liquid fire. Tanks, poison gas were also used.Many new weapons of destruction were invented and used in the World War-II. The most dangerous of these was the atom bomb. Soldiers LifeAs a result of the trenches in World War-I, soldiers, who lived in the trenches, were always covered indirt, resulting in a variety ofbacterial diseases.In World War-II, conditions for soldiers in battle was terrible and caused many disesases like malaria, Scrub Typhus.

Both World War-I and World War-II brought the need for new weapons and technology, which laid the foundation for the latest modern technologies which we are using now. Both the wars left us in grief and horrible deaths of millions of people. let’s hope World Wars should never hope in the future and People deserve to live in peace.